BRISBANE’S property market has come out the winner as interstate migrants push into Queensland in search of cheaper housing and a different lifestyle.

New figures show that although Melbourne and Sydney led the nation in overall population growth, Brisbane was the top choice for Australians looking to relocate.

Data from the Australian Bureau of Statistics revealed people were moving from all over Australia to Brisbane in droves. 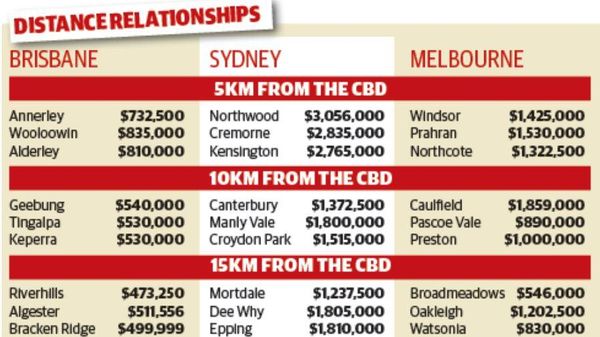 Brisbane had the highest internal migration rate of any Australian city during 2016-17 as more Aussies make the choose our capital when making a move.

Over 2016-17, 10,570 Sydneysiders and 6478 Melburnians headed to our capital to give Brisbane the strongest internal migration rate of any capital city.

When balanced with people leaving Brisbane, this contributed to a net internal migration increase of 12,023.

Over the same period Sydney had a net loss of 18,120 Australians to the rest of the country, but its population still boomed due to overseas migration.

Record high property prices in Melbourne and Sydney might have encouraged Melburnians and Sydneysiders to take a closer look at the Queensland capital according to Harcourts Queensland CEO Brendan Whipp.

“They are saying now is the time to make that lifestyle decision to move to Queensland, and our agents on the ground are seeing that,” Mr Whipp said.

“They see the value for money, I can get less of a mortgage and my commute could be halved.”

Moving back to Brisbane after a few years in Melbourne was a difficult decision for Natalie Connor, but when she was pregnant with her first child she knew it was the right choice.

She and her husband Mark moved to Melbourne a few years ago, but after living in a small two-bedroom apartment in the inner-east suburb of Kew, Brisbane seemed to make more sense.

“I think Melbourne is awesome when you don’t have anything tying you down, but Brisbane is probably more family friendly, because of housing affordability,” Mrs Connor said.

They bought a three bedroom home in Gaythorne last year with the house settling the day she went into labour.

“That would not have even got us an apartment where we were.”

Getting a home like theirs with three bedrooms and only 7 kilometres from the CBD for that price would not be possible in Sydney or Melbourne, and Mrs Connor said they would have had to consider moving to the Melbourne’s outer fringes if they wanted a home.

Mr Whipp said that Brisbane was an attractive option for Australians wanting to move for much more than good weather and more affordable property.

Confidence in the Queensland economy is high according to several surveys, including the Suncorp CCIQ Pulse Survey and he said a solid economy helped people make the move.

Although a lot of people were moving to Brisbane from elsewhere in Australia, not all of them were buying property — yet.

Mr Whipp said that a lot of people that had moved up to Brisbane were renting at the moment, and it could be a while before, or if, many of them decided to buy.

“I think they are testing the water,” Mr Whipp said.

According to the ABS the fastest growing areas in Queensland over 2016-17 were Pimpama on the Gold Coast, North Lakes and Mango Hill in the Moreton Bay region and in Coomera and Springfield Lakes.

But finding out where interstate migrants are buying, and not just moving to, is harder to pin down.

CEO of Queensland Sotheby’s International Realty Paul Arthur said when it came to Brisbane, interstate migrants were looking at the inner-city, the north and the west as their preferred regions.

“In the lower range $450,000 — $700,000, interstate purchasers are flocking towards the suburbs of Stafford, Arana Hills, Ferny Hills and Caboolture,” Mr Arthur said.

“When we move to the next price bracket of $700,000 — $1,000,000, inner city suburbs of Bardon and Auchenflower get the green light, while Morningside is another suburb of choice.”

He said that when it came to Brisbane, interstate migrants wanted something that had good transport, shopping and school nearby.

Read the original article on Realestate.com.au