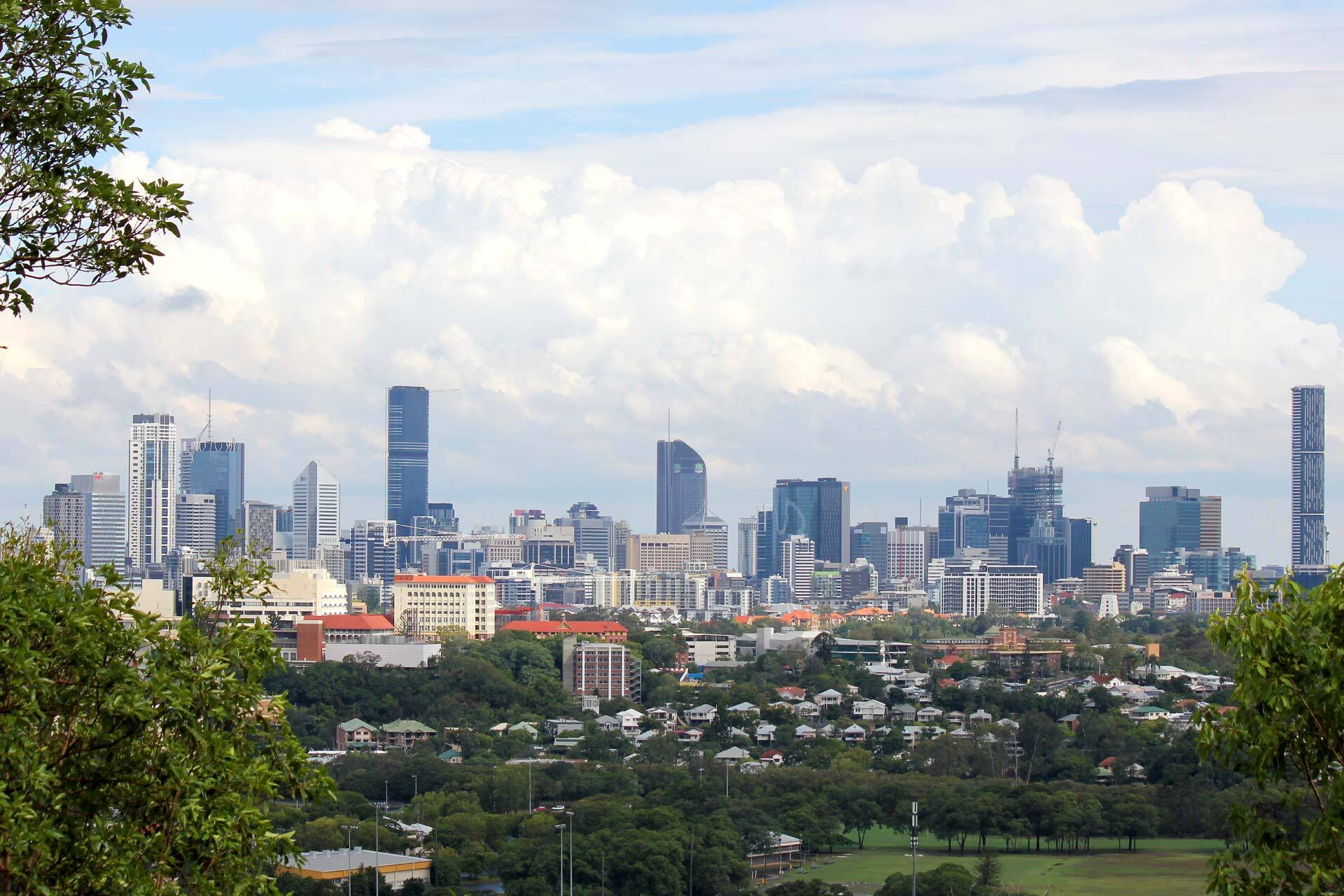 "Get some further insight on what's going on in the property market." - Mitch Connolly, Senior Investment Analyst

Single dad Teifi Caron has been hunting for a house in Brisbane's inner west for five months, but keeps being outbid by desperate buyers.

"It is a sonic boom; the property market is on steroids. It is a bit of cat eat cat," he said.

The 38-year-old has been offering up to 20 per cent higher than the asking price on every property.

"But I have missed out on one a month at least, with the ones I have gone seriously for.

"There has been 50 to 60 people at inspections and you know straight away there is a buzz of excitement and offers to come.

"I would say the winning bids are getting upwards or 20 per cent or 30 per cent higher than asking price.

"It is definitely a crazy market, with agents saying to me they have not seen anything like this for decades."

Mr Caron said he has learnt not to let his heart rule his head with property, but he has realised he'll have to switch up his strategy.

"I am not letting emotions take over. I know it is a tough market and I know there are a lot of people maybe being forced to make quick rash decisions. And I am trying to stay well away from that.

"But now when I do find the exact right property and knowing how much I have been missing out by, I will up my bids and go to 25 per cent or whatever it needs."

The "supersonic" property boom continues to soar with latest data showing a yearly growth rate of nearly 20 per cent — the biggest annual hike since the 1980s.

CoreLogic figures show housing prices have risen almost 11 times faster than wages growth over the past year and are set to soar even further.

Head of Research Eliza Owen said this created a significant barrier to entry for those who do not yet own a home.

"Nationally we are seeing the highest growth in housing values since the year ending July 1989," she said.

"Through the late 1980s, the annual pace of national home value appreciation was as high as 31 per cent, so the market isn't quite in unprecedented territory.

"The annual growth rate at the moment is trending higher, in fact, it is 3.6 times higher than the 30-year average rate of annual growth.

"These are extraordinary growth rates, however for the Sunshine State, we did see huge rates in the early 2000s as well due to the mining boom."

Brisbane ranked the third-fastest city for price growth for August (2 per cent) ranking third behind Canberra (2.2 per cent) and Hobart (2.3 per cent) when it came to prices in August.

"With mortgage rates as low as they are I think this will continue to support growth into next year, but the rate of growth will slow," she said.

"Some people are facing affordability constraints, we are already seeing a reduction in number of first home buyers participating and that will eventually slow rates before we see that turn in the market when we see prices start to come down."

Core Logic found in dollar terms the annual increase in national dwelling value equated to about $103,400 or $1,990 a week.

"In comparison Australian wages are rising at the average annual rate of 1.7 per cent," Ms Owen said.

Disillusioned home hunters are also missing out due to a lack of stock.

Ms Owen said houses for sale were down 30 per cent as owners worried if they sold they would not be able to buy "back in" the same market.

"There is a very broad-based upswing in prices," she said.

"So it is not just the high end of the market that is rising, it is also the more affordable areas like Springwood, Kingston, areas like that, that have also seen increases of around 18 per cent in the last year."

When it comes to interstate migration to Queensland, Ms Owen said data showed Melburnians were streaming into the sunshine state looking for COVID-free safety and a better lifestyle.

"From Melbourne to Queensland, it is up by about 30 per cent when you compare the first three months of this year with the same period last year," she said.

"You can't help but think some of that has to be due to the extended lockdowns that have taken place across Melbourne as well."

Prices 'will sustain at these levels'

The overwhelming migration figures led Premier Annastacia Palaszczuk to claim last week that "Queensland is being loved to death", as she paused interstate hotspot arrivals for two weeks.

"Interest rates are at historic lows and the percentage of income, which is the payments for mortgages, are lower than they were two or three years ago," Mr Collinson said.

"So this supports that house prices are not in a bubble, that they are not going to go up and come down in a crash. They will sustain at these levels."

The staggering growth figures have also been reflected in ANZ's recent house price growth forecast for 2021.

It joined other major banks in predicting a further 20 percent jump due to confidence in buying and selling during lockdowns.

But agents at the coal face agents say many buyers are anxious.

'Better than a boom'

"We have had properties that have sold for nearly half a million dollars more than we thought were going to — it is just extraordinary," she said.

"And we thought our expectations were pretty high — some auctions are getting 120 bids," Ms Trickey said.

"Town houses equally have spiked — it is a lovely way of having a home that is quite large without the price tag of a house.

"Recently we opened up a property in Terrace Street, Toowong — three bedrooms. It is quite large.

"We had 25 groups through on the weekend [and] we ran out of brochures.

"I don't know truthfully how much longer this has to run, but it is much faster and more volatile than the boom in 2008."

West of Brisbane, Ipswich agent Steve Athanates said he had sold through many booms over the past 20 years in real estate, but "this is not a boom — it is better than a boom".

While prices are cheaper in the Ipswich region, they are still the highest the industry has ever seen.

"And we've seen a 20 per cent price increase in the last year.

"Sometimes we are setting a price, which we think is ambitious, and the market will bid over the top of it through the spirit of competition.

"It is not uncommon also that we are now getting eight to 10 offers on a single property and 80 per cent of everything we sell, sells within seven to 10 days."

Mr Athanates said with affordable homes in the region priced from $300,000 to $600,000, interstate investors were flooding in.

"Last week I sold two properties where I was Facetiming these people interstate, so the only inspection is what we show them as we walk through the house," he said.

"Then they get a building and pest inspection to ensure everything is OK, but it is becoming quite common to sell that way.

"People are looking at Queensland in general as a destination they think is safer, due to the way we have handled the COVID-19 crisis."

Property analyst Terry Ryder maintains it has been the pandemic rather than historically low interest rates that is supercharging the current market.

"I think the impact on the level of interest rates is greatly over-rated," he said.

"I think it is only a minor factor in this market as there are a lot of things driving the up-cycle we are currently seeing.

"Quite often we see references to property prices rising 'despite' the pandemic.

"In actual fact, I would turn it around and say the property prices are rising because of the pandemic."

Mr Ryder said COVID-19 had "unleashed forces that would not normally be in the market".

"I think the lockdowns in the two biggest cities are having an incredibly positive impact on Queensland markets, particularly in south-east Queensland," he said.

"And people at the coal face of the property industry in Brisbane, the Gold Coast, and Sunshine Coast say every time Sydney and Melbourne go into major lockdown, their phones run red hot.

"More and more people are just fed up with the continual restrictions and they want to escape, permanently."

"We have got government stimulus spending, which has helped to pump up property markets," he said.

"We have people in lockdown saving more because they can't spend the way they normally would, and they can't travel overseas.

"So there are all kinds of things pumping up the property market that would not normally be there were it not for the pandemic."

Mr Caron knows he must increase the amount of money he is willing to borrow to secure a home for him and his three-year-old daughter, Carys.

"My dream for Christmas would be to find my own place, being in my own place where you can make renovations and feel like you actually have a home," he said.

"So hopefully we can get an early Christmas present and make that happen."

Hamilton-Smith, L. (2021, September 1). Teifi's been offering up to 20pc above the asking price to secure a house. That's not enough in this 'sonic boom'. ABC (Australian Broadcasting Corporation). https://www.abc.net.au/news/2021-09-01/qld-property-prices-soar-driven-by-interstate-buyers/100420608