"The HomeBuilder Scheme proves to help a lot of Australians purchase land in South East Queensland. We can help you take advantage of this massive opportunity today!" - Mark McEvoy, Senior Investment Analyst

We can help you take advantage of the HomeBuilder grant so you can get into that new home sooner.

Prices remained relatively stable during the quarter, falling 0.8 percent to a median price of $248,000 compared to the March quarter. 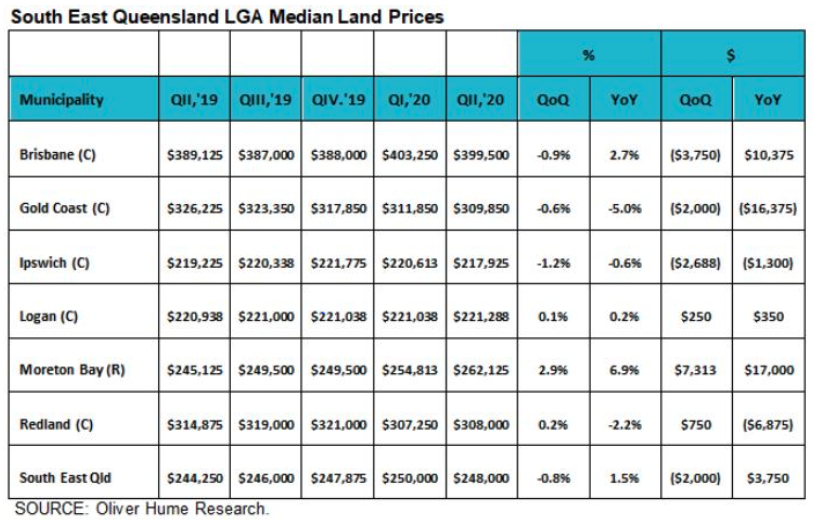 In terms of sales in each region, Moreton Bay moved into the top spot in the South East Queensland land market, taking 26 percent market share. For the first time since March 2016, neither Logan nor Ipswich have claimed the largest portion of sales.

Logan managed to push Ipswich to third place and achieved 24.9 percent of sales while Ipswich collected 24.7 percent, only a handful of sales separated the two regions. This is the first time that Ipswich has been outside of the top two since early 2015.

After dropping to just 273 sales across the south east in April as lockdowns closed sales offices and dented economic confidence, the market roared back to achieve 1,110 sales in June.

The total number of sales for the June quarter was 1,910, up from 1,518 in the March quarter and the strongest quarterly sales since December 2017.

“Despite the Coronavirus shutdowns and their economic impact, there are still plenty of buyers with stable incomes who are more than happy to take advantage of the numerous grants and incentives available,” he said.

“These are the right incentives at the right time and will keep thousands of tradies in jobs as homes begin to spring up on these blocks in the next few months.

“The first half of 2019 was a tough time for the SEQ land market but there was a solid recovery underway towards the end of the year and right up until the lockdowns commenced in the final two weeks of March,” he said.

"With the restrictions lifted and the great incentives in place the pent-up demand is returning.”

The $25,000 HomeBuilder grant combined with $15,000 first home buyer grant from the State Government, means eligible buyers can access $40,000 to help them get on the property ladder. Other incentives, including the First Home Loan Deposit Scheme (FHLDS), can save buyers thousands more on top of the grants.