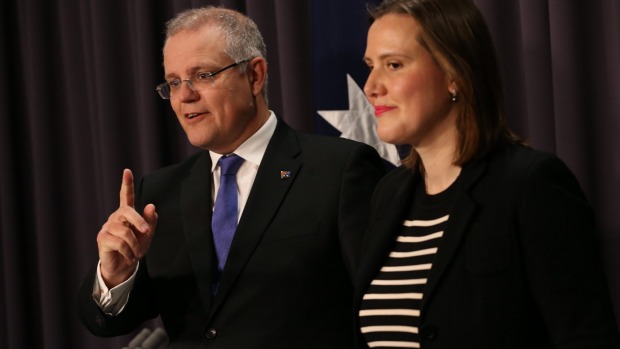 The Turnbull government will give itself scope in the May budget to borrow for large infrastructure projects while also fighting Australia's "spending culture", by revamping the way it reports the nation's debt levels.

In a speech to be delivered today to Australian Business Economists in Sydney, Treasurer Scott Morrison will argue the government needs to "increase the visibility on good and bad debt", enabling it to generate support for spending restraint, boost investment in infrastructure and other areas that generate economic activity, all while reassuring voters and the ratings agencies.

"These changes will make clearer the share of expenditure that is contributing to investment that increases productive capacity and produces future income, and the debt that is being incurred to deal with everyday expenditure," Mr Morrison will say.

He will say it can be "very wise" for governments to borrow, especially when interest rates are low, to invest in "major growth-producing infrastructure assets such as transport or energy infrastructure".

"But to rack up government debt to pay for welfare payments, Medicare costs or other everyday expenses is not a good idea."

In a major political shift, the budget for the first time will start splitting the debt across portfolios so voters can see which areas accumulate debt and why.

"We all need to understand what is driving the growth in our public debt and we need to budget in a way that creates accountability for increasing public debt and the interest payments that go with it," Mr Morrison will say.

"What we are doing is beginning the process of changing this spending culture. Portfolios will be held responsible for the debts they are incurring for future generations as a result of their expenditure."

Mr Morrison indicates that the change to the way debt is classified will give the government room to increase borrowing for big infrastructure projects. In the lead-up to the budget, the government has already supported a gas pipeline from the North-West Shelf to the eastern states, and it has been reported that the long-proposed Melbourne-to-Brisbane inland rail link will receive more than $1 billion in funds.

Mr Morrison stresses the changes are not an excuse to blow out the budget deficit and says the underlying cash balance – the figure used to identify the surplus or deficit in every budget – will "continue to be the key measure reported in budget papers".

"It remains the basis for our fiscal strategy of achieving a sustainable budget surplus as soon as possible."

But the belief within in government is that ratings agencies will not be alarmed if they know increased debt is a result of funding productivity enhancing infrastructure, so long as there is progress towards a surplus.

In his speech, Mr Morrison will note foreign investor interest in Australia remains strong, noting that in February, the Australian Office of Financial Management sold $11 billion in Commonwealth bonds against $20 billion in offers. "This followed the $9.3 billion issue in January that was also oversubscribed."

Mr Morrison will give an upbeat assessment of the economy on the back of a generally rosy international outlook for Europe, the United States and Asia.

"Things are beginning to look up, there are clearly now better days ahead," he will say. However, he will caution that downside risks remain and not everybody is feeling the benefits of an improving picture overall, as demonstrated by flat wages growth.

He hints the growth forecasts in the budget may be upgraded from those contained in the December mid-year update but cautions they will remain "conservative and credible" as they were in December because that "was key in retaining the confidence of financial markets and ratings agencies".

This will extend to the iron ore price forecast in the budget. Mr Morrison notes that after a year of high prices, they have fallen. This volatility makes it "important to have conservative and credible judgments behind our forecasts".

On housing, Mr Morrison will declare that the market is starting to cool as he rules out touching the tax treatment of housing, including paring back the capital gains tax concession for investors, which the government has debated for several months.

Mr Morrison will say the new curbs on investor loans imposed by regulators as well as the government's foreign investor restrictions are starting to work.

"We are already seeing signs the heat in our housing markets may be coming off, especially in the apartment market," he will say.

"While care must be taken to temper excessive investor activity that can inflate the market and increase the risks, equally a policy overreaction could have very real negative impacts. For political reasons, the Labor Party have proposed drastic changes with no thought for the consequences."